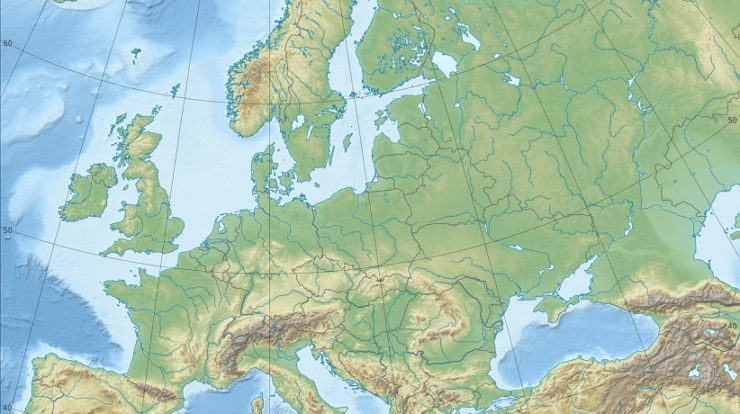 Europe, cover about 10,180,000 square kilometers, about 2% of the Earth’s land area, it’s the second smallest continent on Earth. It is the 3rd most populous continent with over 743 million people (as of June 29, 2019), which contribute about 9.83% of the total world population.

Between Europe and Asia, the ethnic, cultural and linguistic differences vary on a spectrum and there is no sharp dividing line. The most commonly accepted border consists of the maritime border includes Turkish Straits waterways, Black Sea, Caspian Sea, Ural River; and the land border includes Ural Mountain and Caucasus Mountain.

However, the land border has been redefined many times since it was first defined in Classical antiquity. And the geography boundaries are not equivalent to political boundaries.

Currently, there are fifty sovereign countries across Europe. The Russian Federation is the largest in land area spanning 39% of European landmass, and the most in population covering 15% of Europe population.

The warm Atlantic currents affect European climate largely that most area of the continent have temper summers and winters, even in northern Europe, the climate is milder than the ones in other areas in the same latitude such as Asia.

The European continent was the origin place of the ancient Greece and the ancient Rome, and has become the birthplace of western civilization. After the last Roman emperor, Romulus Augustulus, was deposed by a German prince in September 476 AD, the centralized superstate in Western Europe has fell.

And then there’s Age of Enlightenment, French Revolution and the Napoleonic Wars. Together these periods are then the European continent was shaped politically, economically and culturally.

At the end of the 18th century, the Industrial Revolution began in Great Britain and led to a trans-formative impact in economic, social and cultural aspects in Western Europe, it played an integral role in laying the foundation for today’s modern society.

Between 16th and 20th centuries, European controlled various areas of Americas, Africa, Oceania and Asia. When the World War I and World War II took place in most part of Europe. The United States and the Soviet Union became super powers. The Western European dominance suffered a great decline.

Europe was once separated by a non-physical border called Iron Curtain until the end of the Cold War in 1991. In 1949, after a speech by Winston Churchill, the council of Europe was founded to unify Europe for common goals. With the help of various further integration by some European states, the European Union (EU) if formed in 1993.

European Union is a political and economical union that lies between confederation and federation. After the fall of the Soviet Union in 1991, the EU has expanded eastward from Western Europe. The Euro is the most commonly used currency among Europeans.

The History of Europe is unbelievably complex, what we have described is just a tiny, simplified version. The more you know about Europe, the more fascinating you’ll find it is.

We have covered 15 questions in this EUROPE QUIZ, play the quiz now and learn some interesting facts about the European continent. Let’s see how many of them do you know.