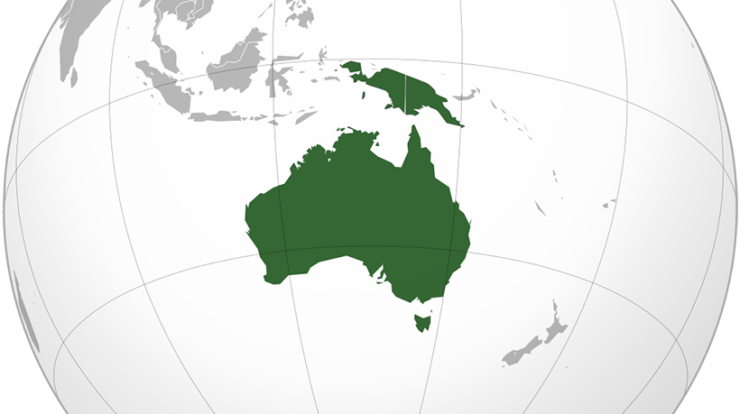 Australia, also called Sahul, Maganesia or Australinea, when particularly referring to the continent. It covers a land area of 8,560,000 square kilometers, about 5% of Earth’s land surface. Australia is the smallest continent in the world by land area and the second smallest continent by population, as estimated in 2018, there are around 41,570,000 people live in the Australian continent.

The continent is consisted of the land masses which include mainland Australia, and two mountainous islands of Tasmania and New Guinea (composed of Papua New Guinea and 2 provinces of Indonesia).

In about 18000 BC, the mainland and two islands were all connected as a continent, when sea levels rise during the last 10000 years, the continent shelf was overlain by shallow seas and was separated into several landmasses. The Torres Strait and Arafura Sea separate the Australia and New Guinea; the Bass Strait separates the Australia and Tasmania.

Australia is located completely in the Southern and Eastern hemisphere. It is part of the Indo-Australian plate, and bordered by Indian Ocean to the West, Antarctic Ocean to the South and Pacific Ocean to the East. Among the seven continents, Australia is the oldest, flattest and lowest landmass on Earth.

Along with New Zealand, Australia is also part of the Oceania sub region called Australasia. Oceania is a geographical region that encompasses Australia, New Zealand, New Guinea and other sub regions that composed of many Pacific islands such Polynesia, Melanesia, Micronesia.

New Zealand is not part of the Australian continent, instead, it is on a micro-continent called Zealandia that broke off from the Australian plated and has been submerged under water.

On the other hand, the northern continental arc that composed of the New Guinea Highlands, the Halmahera Island and the Raja Ampat Islands, is a geologically and volcanically region that sits where earthquakes and volcanoes are formed. It was resulted in the collision of the northward migration of Australian plate and the westward migration of Pacific Plate along the Pacific Ring of Fire.

The Australian continent was completely separated from Antarctica about 30 million years ago and has become almost entirely isolated from other landmasses and foreign species.

Since then, the continent has experienced several climate changes mainly affected by the development of the cold Antarctic Circumpolar Current when after South America separated from Antarctica, which led to a marked tendency towards greater aridity. The inland seas and lakes dried up, as plants evolved to cope with aridity and fire, a lot of longer established broadleaf deciduous forest began to give way to sclerophyllous plants which have hard leaves and short internodes that dominate the Australian landscape today. Some of the common plant species of Australia are: Eucalyptus (gum trees), Acacia (wattles), Proteaceae (Banksia) and Melaleuca (tea trees).

The flora species of New Guinea are a mixture of tropical rainforest species originated in Asia and typical Australian flora species, such as Podocarpus, Araucaria, Agathis, tree ferns and several species of Eucalyptus.

Due to millions years of geological isolation, tectonic stability and effects of the pattern of climate changes on the flora and soil over geologic time, most of the animal species on the Australian continent are endemic to Australia-New Guinea.

Australia is home to a huge variety of animal species, and much of them are native, about 83% percent of mammals, 24% of fish and insects, 89% of reptiles, 93% of amphibians and 45 % of birds that live in Australia are found nowhere else in the world.

There are two special aspects of the Australian-New Guinea continent, the dominance of marsupials and the only existence of monotremes, which are resulted in the unique mycobiota, flora and fauna development caused by northward drifting of the continent.

In New Guinea, there are 284 species from six orders of mammals (rodents, 3 orders of marsupials, monotremes and bats), and 69% of mammal species are endemic. The island also has high diversity of coral reef and marine life includes 1200 species of fish and 600 species of reef-building coral (75% o the world’s total know coral species), bird lives are also flourished in New Guinea, about 781 species are found and 76 of which are endemic, and some bird species are found only in restricted area such as Vogelkop bowerbird, Grey-banded munia and the King bird-of-paradise.

The Australian continent is such a large landmass, what we’ve described is just a tip of the iceberg. If you want to explore more, then take this easy Australia (Oceania) QUIZ and learn some geography facts about Australia (Oceania). We have 15 questions such as naming countries on a map; identify the flags; guessing the capitals, rivers, mountains, world heritage site and more. Let’s see if you can score a 15/15.